Prior to opening the Vermont Pub & Brewery, Greg Noonan enlisted the aid of Bill Mares, then state legislator, to seek changes in the existing legislation governing the on-site sale of manufactured beer. Greg, with Bill's help rewrote the current language of law to allow manufacturers to sell their malt beverages on-site. After a certain amount of drafting acrobatics, that idea found favor with the Liquor Control Board, and then progressively with four legislative committees, both legislative chambers, and finally the governor. In late 1988, Noonan's Vermont Pub and Brewery opened its doors (and taps). Burlington had its first brewery in ninety-four years. Today, every brewery that offers their beer for consumption on their brewery premises owes a debt of gratitude to both Greg and Bill for their efforts.  Below is Greg and Nancy Noonan with Bill Mares cutting the ribbon on opening day at VPB.

Among beer connoisseurs, Burlington’s Greg Noonan is legendary. His books on brewing are considered mandatory reading for home- and microbrewers. Known for crafting unique, delicious beers, he also provided expert consultation on startup and design of pubs and breweries. Noonan founded Vermont Pub & Brewery, creating a region-wide landmark and helping stimulate the economic growth and expansion of Burlington’s downtown.

It’s hard to remember when “brewpub” was not part of the American lexicon, but only two decades ago, most Americans had not tasted beer made in small, independent brewery-taverns. Craft brewing today is a $3.8-billion-a-year industry, with more than 1,300 microbreweries and brewpubs operating in the United States, according to the Brewers Association. This industry boom is a happy surprise to Noonan, although his efforts were very influential in its occurrence. In 1986, Noonan published, Brewing Lager Beer: The Most Comprehensive Book for Home- and Microbreweries, which quickly became a classic reference for craft brewers nationwide.

“You’re not going to find a successful brewer in the country that doesn’t have a dog-eared copy of this book,” says John Kimmich,Noonan’s protégé and co-owner of The Alchemist Pub & Brewery in Waterbury. “It is the definitive book on brewing lager beer.” Noonan was brewing beer as a hobby while working as a manufacturing manager for paper and wood products companies in Massachusetts. Microbreweries were just becoming trendy on the West Coast, and he decided to pursue the commercial possibilities for his craft.  He had managed restaurants in New Hampshire and Boston and wanted his own restaurant to feature his brew. He used the results of his research for Brewing Lager Beer to launch his brewpub in Burlington. “I specifically sited my brewery in Burlington because it’s where I wanted to live. I admired the politics in Vermont,” says Noonan. “I had $175,000, which is a shoestring budget in the brewing industry; brewing equipment is very expensive.” He applied to several banks for additional funds, but lenders were skeptical. “The banks all said, ‘What is a brewpub?’ But I plunged on anyway with the money I had.”  As he prepared to open, Noonan received a visit from Polewacyk, a longtime friend from his St. Anselm College days in New Hampshire. Polewacyk worked as a database consultant in the New York City metropolitan area. “I came to help him open and gave him a couple weeks of my time, doing whatever needed to be done — bartending, construction, cleaning, setting up a computer system, writing checks, shoveling,” Polewacyk says. A few weeks turned into months, and then a career. “When I came up those first two weeks, I realized how chaotic it was. I computerized the operation and said I would stay for three months.”  Three months became six, and Polewacyk earned just enough from bartending to cover his expenses.

The following June, he decided to stay.  “I remember the exact moment,” he says. “I was walking up Church Street. It was a beautiful day, and I was waving hi and talking with people I had met through working here. I knew a whole bunch of people. I said, ‘This is what it’s supposed to be about! Why would I want to go back to that rat race?’”

Polewacyk continued as the operations manager, overseeing auditing and accounting, earning his partnership through sweat equity. “He makes sure things happen the way they should,” says Noonan. “I tend to be more the idea person behind the scenes.”  Vermont Pub & Brewery opened in November 1988 with just enough money to cover payroll. “It was an inauspicious beginning,” Noonan says. “We eked our way through the winter of ’88 to ’89, barely by our teeth, with no cash reserves.” It was not an efficient way to open, he admits, but he needed the cash flow. “We ran it mom-and-pop for the first five years or so, which means we were here all the time. We put in 80-plus-hour weeks,” says Noonan.  “Sometimes we would sleep in the booths, then get up at 6 a.m. and start mopping the floors,” Polewacyk adds. Together, they built the business, and by 1990, they had enough cash flow to pay themselves salaries. “Sales have slowly improved every year,” says Polewacyk.  Gradually, Vermont Pub & Brewery became a destination that helped expand Burlington’s downtown beyond Church Street and draw people toward the waterfront.  “They moved into that space when Church Street was the only place to be, and people did not gravitate beyond it, ” says Ann Heath, property manager for Investors Corporation of Vermont, the pub’s landlord. “We had never heard of a microbrewery. It was different and innovative. They enticed people with the product. It expanded the scope and viability of the city,” she says. Lagers, wheat beers, Irish and Scotch ales, pale and bitter ales and seasonal beers are created in a 14-barrel, whole-grain brewery in the pub cellar using recipes developed by Noonan. The brewery also makes seltzer and root beer. All brews are unfiltered and contain no preservatives.

Vermont Pub & Brewery won its first gold medal in 1991 at the Great American Beer Festival, and it has received many awards since then.  At the Great International Beer Competition in November 2006, on the eve of the pub’s 18th anniversary, Vermont Pub and Brewery Burly Irish Ale received a Gold Medal; Forbidden Fruit Framboise brought home silver; and Handsome Mick’s Smoked Stout won bronze. All three medal winners are regularly on tap at the pub. The food menu, which has changed little since the pub’s early days, includes home-style meatloaf, chili, gravy fries, grilled sandwiches, chocolate brownies and the classic bangers and mash, with sausages custom-made by a New Hampshire smokehouse. Shepherd’s pie is a top seller, Noonan says. “We wanted a populist menu,” says Noonan. “Every brewpub back then was doing new American cuisine. We wanted to prepare good, basic food at reasonable prices.”

“There’s plenty of fancy places to go to, but people like good home cooking at good value,” says kitchen manager Mike Trepanier, an eight-year employee. The restaurant strives to offer local foods while keeping prices low. Locally raised beef, baked goods, seasonal local produce and Vermont coffee grace the menu. It also features an array of Vermont cheeses, wines and cider.  “We are the busiest restaurant in Burlington, without a doubt,” says Noonan. The restaurant seats 175, and Noonan estimates 350 to 400 people come through daily. “In summertime, we are full every single night,” he says. Even winter sales continue to climb, says Polewacyk, noting a 15 percent increase during January and February 2006. Noonan attributes the continued growth to a focus on happy staff. Employees receive bonuses based on several factors, including time and effort. “We give them incentives and try to treat them as the important people they are,” says Noonan. “They are happy and they pass that on to our customers.”  The owners endeavor to be good corporate citizens by sponsoring community events and being environmentally responsible. In 2002, Vermont Pub & Brewery was honored by Chittenden Solid Waste District for recycling and waste reduction.

Noonan continues to build his own reputation among craft brewers. He is a well-known speaker at brewers’ conferences and author of numerous trade journal articles and books. He published Scotch Ale in 1990 and Seven Barrel Brewery Brewers’ Handbook: A Pragmatic Guide to Home Brewing in 1996. In 2003 he released The New Brewing Lager Beer.  Taking his intimate knowledge of brewing and brewpub start-ups, Noonan opened pubs in multiple locations. In 1994 he launched Seven Barrel Brewery in West Lebanon, N.H., followed by the 1997 opening of Amherst Brewing Company in Amherst, Mass.  Then he stepped away from those locations, although he still owns the one in Amherst. “I liked the excitement and challenge of opening; however I decided I was working myself out of the hands-on work and into a job I didn’t really want,” Noonan says. “Both are doing quite well without me.”  John Kimmich sought out Noonan to learn the trade. Kimmich waited tables and eventually became head brewer at Vermont Pub & Brewery before leaving to open The Alchemist. 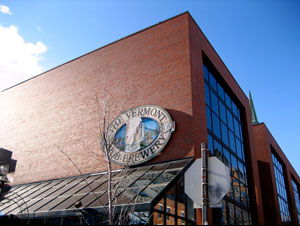 “Greg is a major reason that The Alchemist is a success,” Kimmich says. “He’s been a wonderful mentor. He’s got the blending of the chemistry knowledge with the esoteric side of things.”

Now that they don’t have to sleep in the booths and work 80-hour weeks, Noonan and Polewacyk can concentrate on outside interests. Noonan is researching another book on a completely different topic: Irish history. He stills enjoys brewing, and says his favorite beer is “the one in my hand.” Polewacyk spends free time with his pre-teen son, a budding musician.

The partners enjoy planning special events at the pub, highlighting Vermont products along with their beer. In January they hosted a Vermont cheese and beer tasting in partnership with Montserrat Almena of the Vermont Institute for Artisan Cheese. They host an annual Scottish night, featuring a selection of single malt Scotch whiskies.  “We’re focused on doing what we do and trying to do it better,” says Noonan. “I’m very proud of Vermont Pub & Brewery and the care the people who work here have for our customers. The customers are the important part.”